HOW TO WRITE A BOOK AND NOT GET PUBLISHED 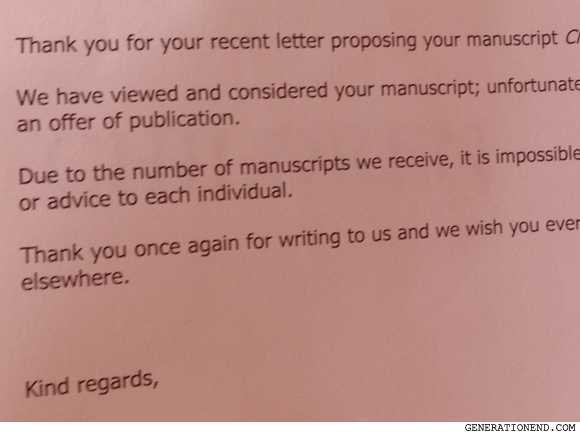 I’ve written about four or five novels, all unpublished and all repeatedly rejected by publishers and literary agents. For money, I’ve taken up a whole range of jobs.  I’ve delivered pizzas. I’ve worked in a butcher shop, a sushi shop, a noodle shop; I’ve worked as a copywriter for a major corporation. I hated them all.

Someone, I forgot who, once told me to keep writing books even if no one’s reading them. There’s a lot about what I do that I don’t often tell you about. In between all of my moments of love and loss and all that other shit are hours and hours of me sitting in front of a laptop, typing, or hours and hours of me writing things on napkins while I’m out, or several evenings when I tell people I can’t join them because I have to stay home to write or edit or work on a cover letter for a literary agent. Although I write about a lot of depressing things, I have to remain optimistic. Heartache may serve as fantastic fertiliser for good work, but all artists need optimism, no matter how unattractive it may be – our lives literally depend on it. Surface Children is the first “book” I’ll be publishing on my own. I know I keep saying this, but it’s almost done.

Anyway I only had one source of income and I fucked it up. I lost my only client – the two women who were paying me good money to write for them every week. Apparently I’d been missing all of my deadlines and had been drunkenly texting one of them, the one with the bigger ears, at four in the morning too often. They fired me via email.

“You did,” she said softly. She was quiet for a while and I pictured her lying there with her eyes still closed. Eventually: “What time is it?”

“How the hell should I know?”

“Are you still coming by the bar tonight?”

I looked downwards, at me knee. “Yeah. Yeah, I’ll see you tonight.”

I picked my car keys up and drove to a shopping centre. I walked to an ATM and checked my account balance: there wasn’t much left. I just stared at the screen, at the numbers and the pixels, until someone behind me cleared their throat. I withdrew three hundred dollars to pay for Ariel for the evening and sat down in the food court somewhere and did nothing.

I looked up. It was the girl from the clothing store, Jamie. “Hey.”

She looked at the empty table in front of me. “Having fun not eating lunch?”

“You can join me if you want.”

“My break’s nearly over,” she said, but sat down in front of me anyway. “You look sad.”

I crossed my arms. “I don’t think I’m cut for work. I don’t like people baiting me with money to dictate how I spend the rest of my life.”

“You’re going to have to support a family with that mindset one day.”

“You should start your own business,” she said finally.

“Want to have a drink with me?”

She looked at her watch. “Come get me at five? We can like, drink then.”

I drove to some kind of RSL club, went to the pokies and lost ten dollars. I went to the bar and ordered a house red, followed by a whiskey dry, followed by another house red. I drove home, went online and looked at job listings. I closed the window and went to the Centrelink website and started writing an application for income support but closed the window again. I read a book, threw it against the wall, picked it up, threw it against the wall again. I fell asleep, woke up and drove to the shopping centre and picked Jamie up at five forty. We drove, slowly, to some place near the city that she heard about. We had dinner, we had lots of drinks. In the parking lot she told me that she was going to pass out soon, and I turned my phone off, and, while looking outside my windscreen, she said, “It’s funny. It’s funny how, like, you can only see the stars when it’s dark outside,” and I put a sleeping pill in her mouth before taking one for myself and we both fell asleep in my car.