HOW TO LOSE SOMEONE YOU CARE ABOUT

Posted by Dean on Nov 7th, 2013 in Ariel, Nights Out, Relationships 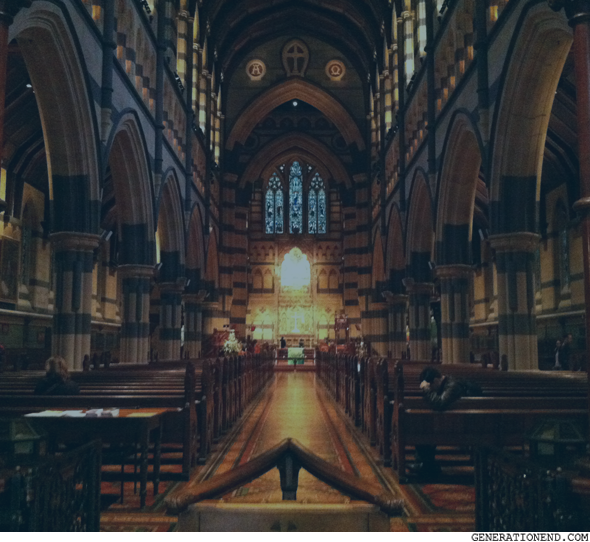 The rest of my Melbourne trip with Ariel went peacefully – we ate and we drank coffee and we met a few people. Before leaving we went into a cathedral and sat at the back and Ariel knelt down and cried and I didn’t ask her why. After about an hour of crying she told me that God punishes those He loves and we stood up and walked into a McDonald’s and quietly talked about how were going to end things, and how we shouldn’t talk to each other for a few weeks to move on as quickly and practically as possible. I begged her to get out of her job as soon as possible and I promised that one day, when I grew some damn balls, I’d find a way to help her and her aunt and her cousins. She said nothing. We flew back to Brisbane, and at her train stop she smiled and embraced me and wiped her eyes and said, “Goodbye.” I watched her leave: her legs, her hair, her earrings, her purse, her suitcase, the way her arse moved. I hated her and I wanted her and I didn’t know what to do.

I hopped off at the city and went to the library and found a computer and found a number for Centrelink. I called the number and spoke to someone for about an hour regarding government assistance – they told me to sign up for something online and organised a time for me to meet them to see how they can help me, to see how much money they felt I deserved. I then applied for a few jobs online, feeling sick each time I did. I printed a few resumes and, forcing a smile, walked to a few cafés and handed them in. I walked to South Bank, stared at the Ferris Wheel, walked back to the city. I looked into a few bars but didn’t walk inside of them.

I sat on a bench, doing nothing for a while. I texted a few people to see if they were free and most of them, the ones I actually kind of wanted to see, said no. I finally decided to call an ex-girlfriend who now lives in the east side or something.

“I’m sure you’ve still got great legs,” I said.

“You wouldn’t say that when you see me.”

“Yeah well you know what? It kind of makes me feel good to know that you’ve gained weight.”

We spoke a little longer. She told me about how insecure she always felt, how she found herself stuttering when she met strangers, especially men, and how she thought people rarely noticed her, and if they did, they’d talk about her and laugh at her and think she was ugly. She cried a little and I asked her what the hell was wrong with girls these days, that they were always crying about something, that I would totally do her if I saw her again. She finally laughed.

I told her about Ariel and about this other girl I met at a shop that I’d hang out with once in a while. She told me about this date she went on with this guy she met online, about how at the end of the night the guy asked if she wanted to see the tip of his dick. She said, “Sure, okay.”

She invited me over. I said, “Okay,” and I drove to her home and she was right: she’d gained a shitload of weight. We had some tea and argued about something and ended up yelling at each other. She threw her empty teacup directly at me and it hit my arm and it fell to the ground, unbroken. I picked it up and threw it at her and she leapt – literally leapt, like in the movies – out of the way and it shattered against a cupboard. She called me The Worst. I laughed and said that I didn’t aim for her, anyway. I walked over to her and tried to pick her up but she was too heavy. I laughed again. She stood up and just glared at me and told me that I nearly killed her and I told her not to fucking exaggerate. I asked her if she was wet and she said, “No, fuck no. What’s wrong with you?”

We resumed talking about our lives until we ran out of things to say: she yawned, I yawned, she checked the time on her mobile phone and told me that it was time for me to drive home. We hugged and kissed a little, and I told her that I’d made too many mistakes in my life, and she asked me, “Why can’t our hearts remain fragile?” and I walked to my car and I drove for probably three hours into goodness knows where.

NEWS: My book of short stories, Surface Children, is now available on paperback.