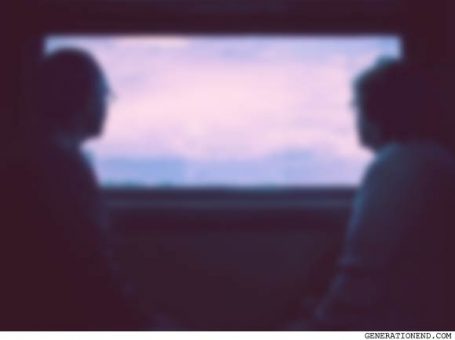 There was an oldish man and an oldish woman and some experts believe that at varying points in their lives, they had fallen in love with each other.

But the pair was old now, and the concept of falling in love seemed like an oddity one could only discover in books. Now all the couple had for each other was an acceptance that they would never be apart, even if they tried.

But it was around December when the old man began to die.

His hand shook so she held it tightly. “At some point I had forgotten who I was,” he said.

“I don’t think we ever knew who we were.”

The old man looked towards a small speaker near the bed. His lip quivered. The woman slowly stood up and hobbled over to the stereo—a gift from a neighbour—and pressed play.

For a moment, only the music occupied the room.

The old woman didn’t respond to that because he said that often. “When I die” this and “when I die” that. He wouldn’t be quiet about it.

Light seeped in through the window above the old man, and above him you could see floating bits of lint.

“If you die, I will also,” the old woman said, returning to sit next to him. She stroked his face. “We’re too connected now.”

“Have you ever cheated on me?” He asked her.

“Of course not,” she said in an instant. Though she didn’t dare reciprocate the question.

And then he died.

Those were his last words: Have you ever cheated on me?

To the old woman, the funeral was pointless, but she did it anyway. In the evenings, after the funeral, the old man would come visit her, and they’d hold hands, and look at a wall, or outside a window, or up at the ceiling that needed fixing. He’d ask her the stupidest questions and then disappear. Sometimes she wept, sometimes she didn’t.

It was summer when the old woman walked into her car without telling him. She drove past cities, towns, hills, grasslands. She stopped at this beach where she used to go as a child. The beach was different now: it looked smaller than she remembered, and there were more people, but the hiss of the waves and the lashing wind and that salty smell remained the same. She looked at the sea for a while. She went back into her car and drove further until she reached a small park.

“I’ve been looking for you,” the old man said.

“It’s not so bad where I am,” he said. “There are problems here and there, but…” he shrugged.

The old woman rolled her eyes. “You see problems in everything.”

The old man reached his hand towards her, but she pulled away.

The woman drove further on until she found a house. She knocked on the door and this man, a little bit younger than her, opened it. At first he looked surprised, and then angry, and then calm. His brows furrowed, and he smiled, and then he frowned again. He let her in.

Without saying anything, she sat down and observed him while he made her tea. He placed everything on a tray and sat down in front of her. It was her favourite tea. They drank in silence. Eventually he touched her hand. A tear streamed down her eye. She pulled away, opened her purse and handed him a number of opened letters, and inside those open letters were her replies. The man slowly opened one and sobbed.

The old woman left him there and kept driving.

“That was weird, what you did,” the old man said.

She parked in the carpark of some shopping centre and sat there, trying not to think of much. She watched men and women and families walk to and from their cars. She watched the sky gradually become darker, and as she watched everything her hands stayed clasped onto the steering wheel.

“Want me to show you what it’s like?” The old man asked, and when she didn’t enquire further: “The stars?”

All of a sudden, the woman saw it all: she saw time itself, as if some beautiful creature, traversing across galaxies and multiverses; she saw smoke and flames and ice and things that people will never have words for; and she felt pain, and she felt sorrow, and she felt contentment, and she felt joy, and she felt nothingness, and amongst it all everything was as it should’ve been. Was everything worthless? Or was everything overflowing with worth?

“You know,” the oldish woman said, looking upon it all, “how do I know it’s real and you’re not just tricking me?”

“Have I ever tricked you?” the oldish man said.

The old woman let go of the steering wheel. The old man held her hand and she leant on his shoulder.

“You and I, we’ll always be connected.”

The old woman drove home, and she made her last meal; she showered, she moisturised, she prayed, and the old man waited. She lay down and closed her eyes.

Book I’m reading: Prisoners of Geography: Ten Maps That Explain Everything About The World