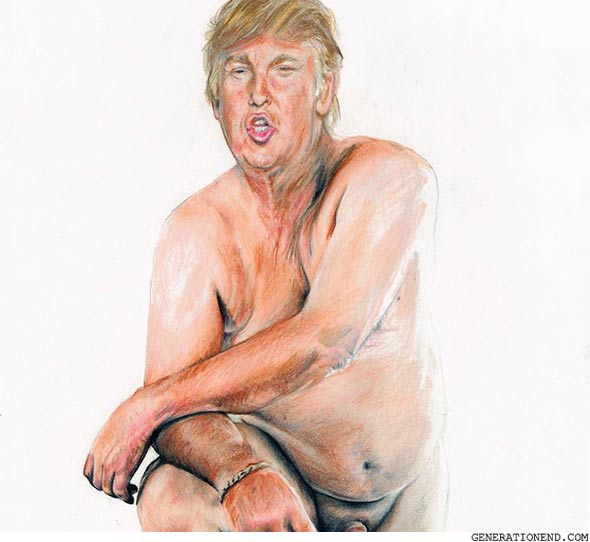 A FANFICTION LOVE STORY ABOUT DONALD TRUMP AND ALEJANDRO ALEJANDRO

I’d like to quickly interrupt my own love story with a much more important one. It’s a love story that isn’t often told, and when it is told, it’s never told properly.

They met a few years ago, when Alejandro ran a taco restaurant chain and Donald was busy with The Apprentice. It was raining that day, and left with no other options, Donald, covering his hair with a newspaper, rushed inside one of Alejandro’s restaurants.

“Someone get me a fuckin’ towel!” he demanded of the restaurant. “… And a taco too, please.”

Luckily for Donald, Alejandro was in store that day. Alejandro remembered Donald clearly and often teased him about it during the many afternoons they spent in bed: “your wet grumpy face was red like a tomato,” Alejandro would giggle as he playfully ran his fingers over the billionaire’s face. “And your worried little wrinkles? They were deeper than the depth of your eyes.”

What drew Donald to Alejandro was his obvious obliviousness to his own perfection. Tall, tanned and talented, Donald believed that Alejandro could’ve had anyone in the world, but he chose someone as flawed as Donald was. Donald spent countless evenings awake in bed, just looking at the sleeping man next to him and thinking, “Is this the tragedy of love? This hurt and joy I’m feeling right now? How can he sleep so peacefully, knowing that I’m not good enough for someone as perfect as he is?”

It took a lot of work for Alejandro to break down Donald’s insecurities, but when he did, it was as if he’d found a nation full of rich, unguarded oil. Donald told him everything: his dreams of being a singer slash dancer, his love for When Harry Met Sally, his cherished dinners with his daughter, his fascination with the Quran, his fear of cockroaches. “Sometimes I just want to get away from it all,” Donald once confided to Alejandro over the phone after a long day at work. He took a deep breath, letting a temporary, mutual silence envelope them both. “Sometimes I just want to like, run away and not look back.”

“How about this?” Alejandro said in his usual calm voice. “You close your eyes, and you take a deep breath, and you imagine me holding your hand. Are you closing your eyes?”

“Now relax. Just clear your head. Soon, I’m going to hang up the phone, but you’re going to keep your eyes closed a while longer. You’re just going to imagine us holding hands, staring at the quiet, beautiful blue sea. When you open them again, you’re going to call Susan right away and book a massage. Not just a shoulder massage, but a full body massage. You deserve it.”

Alejandro clearly remembers the first time they made love. “What are we doing?” he asked Donald. “We’re doing what’s right,” Donald grunted into his ear. Even though it was a little unorthodox, Donald wanted to do it missionary so he could stare straight into Alejandro’s eyes as he penetrated his anus like he’d never penetrated an anus before. As he came, Donald quickly realised that people like Alejandro were the reason love songs existed.

“You know what?” Donald told Alejandro one day. They were in bed, holding hands, staring at the ceiling. “Let’s do it. Let’s run away.”

“What?” Alejandro checked his watch. “Now?”

“But you have work.”

“Work will mean nothing when I’m at my death bed.”

“I know,” Alejandro said, stroking Donald’s thick, rich hair. “I agree. But you need to be our president. What a president does will mean many things to many people.”

For a while, Donald remained silent. He looked up at the ceiling. His forehead creased, forming a rare expression on his face that only usually appeared when he would deliberate over items in a lackluster restaurant menu, only to give up and tell Alejandro to decide on what to order. He sighed, squinted, rubbed his eye and turned his back towards his lover.

Is this man crying? Alejandro thought. “Are you crying?” He asked Donald. But he might as well have been speaking to a wall. “Donnie?”

“Once I run for president, you… we’ll…” Donald didn’t continue, but he didn’t need to. The two lovers knew the inevitable, but neither wanted the truth to be a character in their fairytale.

That night, Donald dreamt of the sun. It was large and its light painted the sky with pure, crystal white. He dreamt of a magnificent old Mexican town under that sun, and of a man who lived in that Mexican town. This man was a handsome, energetic man, and ever since birth his mother would tell him, “Create the world with your own hands.” This man’s fondest memories would be with his mother, sister and younger brother: the midnight dances, the Drama Club, the running in the rain, the endless laughter. It was a beautiful life, and it was a beautiful dream – so beautiful, in fact, that Donald woke up with a smile on his face. Donald turned to tell Alejandro all about it but quickly realised that he was all alone in his bed.

“Alejandro?” he whispered into the world.

Book I’m reading: What I Know For Sure.