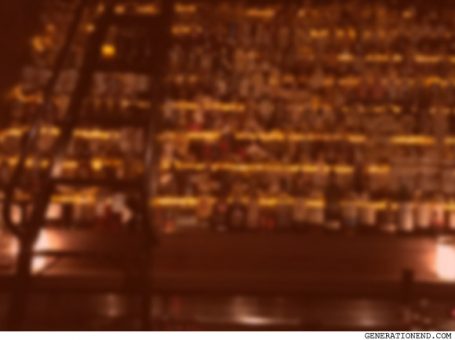 Posted by Dean on Sep 9th, 2018 in Christie, Nights Out, Relationships, Spirituality

It was with great disappointment that I found myself at peace. I hadn’t been clubbing in years, and I refused to go, so instead I drove Vail to the clubs and just sat in my car, in the Valley, on floor five of the parking lot or something, and making sure all my windows were closed I looked out towards the shitty scenery: the building in front of me, the blast of orange light, smoke, haze, a hidden star somewhere far off, and in the background some lady screamed, “Shave your dick! Shave your dick!” and I smiled and thought, “This is good, this is great, I would rather be in here than out there.”

What the hell do you do in clubs nowadays? How the hell do you dance? Whatever it was, it was obvious I was getting old. If you took away all my clothes and money and whatever else I had, all I had left besides my body was time — my body was deteriorating and my time was rapidly going up in flames.

“I want to curl into a ball and get lost in Childish Gambino video clips and YouTube,” I told Christie one evening.

“Grey hair is a crown of splendour,” Christine told me reassuringly. “That’s from the Bible.”

“You’re only saying that because one day your tits will sag,” I said, “and sooner or later you’re going to dye your hair out of shame.”

Christine scowled and then laughed. “What would you do if I didn’t dye my hair? What if I let it turn grey? Would you let me wear my crown of splendour?”

“It’s the same when women are attracted to men,” Christine said. “We find different parts of men attractive depending on their age, and also depending on our age. You can call us sexist, or horrible, but you can’t force someone to be attracted to something that doesn’t attract them.”

“Can we stay eighteen?” I asked her.

“Does it really?” She placed her hand on mine. “Is it really that bad?”

I leant backwards. I scratched my nose. “I don’t know. You get people with dementia, and you get all those old people who no one listens to, and when we get old we get weak, and then we get forgotten, and… it’s just that…” I shrugged, unable to move past my mumbling. “I don’t… know.”

Christine picked up her phone and found another Bible passage. She read this to me:

“The words of the Teacher, a son of David, king in Jerusalem:

What do people gain from all their labours
at which they toil under the sun?

Generations come and generations go,
but the earth remains forever.
I denied myself nothing my eyes desired;
I refused my heart no pleasure.
My heart took delight in all my labor,
and this was the reward for all my toil.

Yet when I surveyed all that my hands had done
and what I had toiled to achieve,
everything was meaningless, a chasing after the wind;
nothing was gained under the sun.”