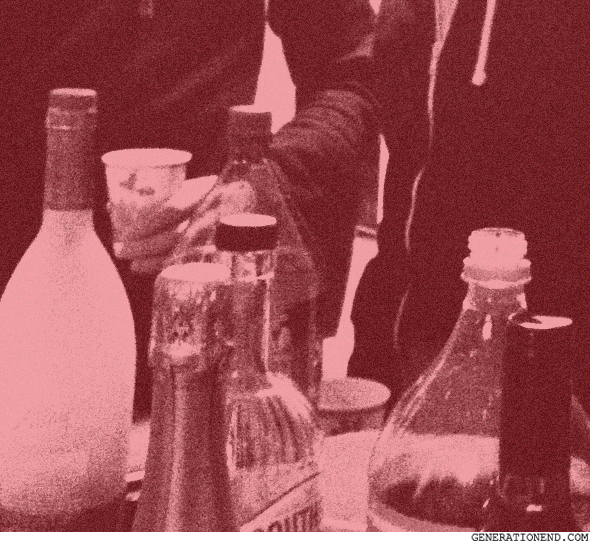 It’d been about a week since my PRK laser eye surgery and things had improved: I could walk around with my eyes open and when things were good, objects in the distance looked clearer and crisper than when I used to wear contact lenses. I’d also become slightly addicted to the sleeping pills they gave me, Hypnodorm – it was much better than alcohol; I’d take one and I’d be able to fall into a deep sleep, an uninterrupted sleep, a dreamless sleep, a sleep that I hadn’t had in a long, long time, and it was bliss: I could ignore the world for a few good hours and wake up knowing that another day was successfully over.

“OPEN UP, DEAN, OPEN UP!” I woke up and opened the door and there was Jude and six other friends of ours – three guys and three girls – all excited to see me again and all already a bit drunk. One of the guys, James, ran into my toilet as soon as entering and vomited sushi all over the place. He came out about twenty minutes later and said, “Don’t worry, man, I cleaned it all up, I cleaned it all up.” As that happened everyone else rushed to my table and set up a number of glasses and shot glasses and Greygoose and Southern Comfort and some beer and a bottle of red something and a white bottle of something and Sprite and Coke and that’s about it. “You know I can’t drink yet, right? Because of my meds?” I said to everyone but they ignored me and handed me a shot glass.

What happened next was what happens in every drink up: a guy and a girl snuck off into a room and didn’t come back out, a girl became horribly depressed and anti-social and walked off somewhere and no one followed her, a guy kept yelling, “I’M HUNGRY LET’S GO GET SOME FOOD”, a girl kept giggling and flirting while letting us grope her all over, a bunch of people puked; and as this all escalated what started off as laughter and dancing evolved into a lot of slurring and slow talking, which then evolved into people breaking off into smaller groups, which then evolved into someone sleeping and some people talking quietly amongst themselves and someone constantly asking, “You sure you’re alright to drive home?”

It was seven in the morning and we were still awake and I needed to go for an eye check up. My vision wasn’t reliable yet so one of the girls, the one who became anti-social earlier, ended up driving me. We were both dizzy and tired, and once in a while I’d catch her closing her eyes and drifting off into a sidewalk or into another car. We chuckled. After my eye check up we parked at a restaurant in Paddington that was closed, and, sitting there in the sunny parking lot not knowing what to do, we spoke about life for a while, and once we were sick of talking about life we browsed by the stores scattered around Paddington, and once we were sick of browsing by the stores scattered around Paddington we drove off to meet a friend of hers who gave me more Hypnodorm for free even if I offered her money.

We went to DFO where she bought ten dollar shoes; we had lunch; she drove me home. “Do you have cocaine?” she asked me as she parked her car. I said no, and she hugged me and I said thanks for the lift and she handed me a music CD of a group called Ou Est Le Swimming Pool and said goodbye. I was exhausted. I walked inside and looked at the mirror, but not at my reflection: I looked for something above me, to the right; I don’t know why, but it looked strange and dark and frightening. I closed my eyes and opened them and the thing, the horrible thing – it was still there. I walked to my room and put the CD on the floor. I sat on the edge of my bed, which now smelt like sweat and vagina. I thought about nothing for a while, texted a few people. I lay down, took a pill, smiled and went to sleep.

Some extra news: I’ve published two teaser short stories in lead up to my book, Surface Children. You can view the short stories here.