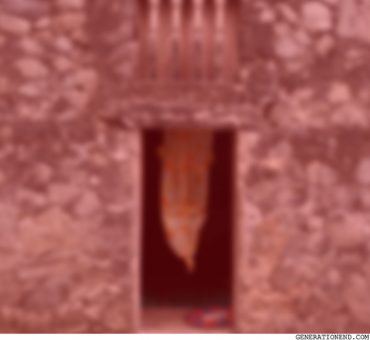 Christie and I didn’t meet much when I went travelling, but once in a while she’d join me. She went with me to this old village. I had no idea how old it was, but everything about it seemed ancient: there was no electricity, there were no doors and all the houses looked like they were made of stone. But somehow people still lived there, refusing to be victims of change.

Christie loves taking selfies and photos in front of everything. She takes them all the time. She took multiple selfies with me for every few steps we took within the village.

“Here, let’s take a selfie in front of it.” She smiled.

“This is ridiculous,” I said.

For me, the most memorable place in the village was this old stone house (or was it a hut? I have no idea) situated a few minutes’ walk from the centre of the village. I noticed it from a distance: it looked comfortable in its isolation, its windows covered by the shade of some worn out tree. I asked our tour guide why the house was situated by itself. He shrugged and looked at his phone to google an answer but couldn’t find anything.

I walked towards the old stone house on my own. Christie, busy taking photos and applying filters to them, asked me where I was going—I ignored her. As I walked some part of me hoped she would join me or keep pestering me with more questions. But she said nothing.

I stopped in front of the lonely house, took a photo of it and sent the photo to some friends. This particular house had no physical door (just an open entrance), and even though there was no response when I asked, “Hello?” several times in a row, I had a feeling someone lived in it. I could sense their presence, their life. And for some reason I could tell that person lived on their own. I quickly wondered about this person: I pictured a woman who wrote letters to her children abroad… or was the person a man who smoked cigarettes? Where did he buy his cigarettes, and what did he do on Saturdays? Had he once loved someone? He probably loved hundreds of women, but only a bouquet of those women had ever loved him back. I took another photo and replied to a few text messages from friends.

I stepped inside. It was a bright room and the air felt light. There was a bed, and next to the bed was a small table that hosted a notebook, radio and cross. I wondered how that person could’ve lived without a MacBook or iPad. I wondered what that person did instead of charging their mobile phone at night. I placed my hand on the bed before quickly removing it. Near the foot of the bed was a toilet bowl and sink. The place smelt like nothing. I peered around, wondering whether I should take a selfie in the room (and what caption I could’ve written for it when I uploaded it online), when I noticed a curtain hiding an entrance to another room. I felt my phone vibrate—I was tempted to look at my phone notification screen, but decided, after some thought, to ignore it.

There was no response, so I stood in front of the curtain for a moment, my fingers lightly touching its fabric, before opening it to reveal darkness. The darkness leapt into the room like some excited dog, drenching everything in its mystery.

I took a step inside: it was a tiny room, and everything about it seemed damp. I thought it was a shower, but it wasn’t. It was just a small, dark room. My phone was vibrating again and, with some disciplined effort, I ignored it again. There was something shiny in front of me. I squinted at it in the dark before concluding I needed my phone’s flashlight to look at it. I pulled out my phone to shine a light on it, but before I activated its flashlight I noticed a number of texts from Christie, various family members and a friend I was sending photos to. I replied to them, and after a few good minutes of texting I once again realised where I was. I turned my phone light on and looked at the shiny thing in front of me—it was a mirror. I looked at the mirror, at my face in the dark. Why would someone need a mirror they could barely see? What did the man (or woman) do with it? I felt an answer emerge from my heart but before I could understand what it all meant my phone vibrated and I received another message, telling me to check out an event invite someone sent me on Facebook. I replied to the message. I then opened my Facebook app and scrolled up and down my newsfeed before once again realising where I was. I looked back at the mirror and placed my finger on it, and when I removed my finger I noticed my fingerprint. Using my shirt, I tried to wipe my print but it remained.

I was about to go to YouTube to look for a tutorial on how to remove fingerprint stains from mirrors when something dropped in the distance.

My heart raced just as much as my phone vibrated from new messages and alerts. I glanced behind me, but no one was there. I looked at the mirror, then back at my phone. I took a few steps backwards, took a selfie, sent it to some friends, checked some emails, viewed my Instagram newsfeed, and, still holding my phone, closed the curtain and left the old stone house.

Check out my Insta pics