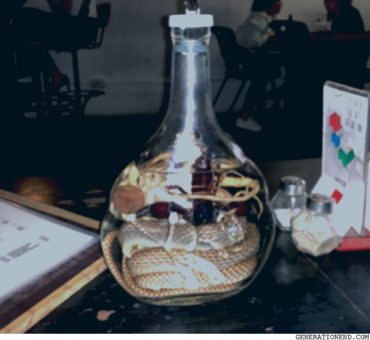 Posted by Dean on Apr 2nd, 2019 in Alcohol, Nights Out, Spirituality, Thoughts, Travel

I committed the next three months to not drinking alcohol. What I miss about alcohol is how much easier life gets when you drink it. With alcohol, it’s easier to embarrass yourself, it’s easier to make friends, it’s easier to laugh, it’s easier to hug people and it’s so much easier to get away with doing the things you’ve always been too afraid to do. You can pretty much blame every affair you’ve had on alcohol. Things look prettier, too. The ridiculous rubbish swarming around your floor doesn’t look like rubbish anymore—it just looks like carpet. And when you drink, every woman becomes pretty. Maybe not every woman. Nothing bad has ever come from alcohol.

I met Francesca at an art gallery. She had shortish hair and tattoos on her wrists and she used to be a model for one of the artists there. She gave me her details, and she took me out to a place near where I was staying in Manila, to a restaurant of a friend of hers.

“Here,” she said, offering me wine.

“Why what’s wrong with drinking?”

“I’m trying to get closer to God.”

We spoke for a while, about things and things and more things, until she finished a bottle of wine. She told me about a good friend of hers who recently passed away. He jumped off a building and filmed it on Facebook Live. Since then, people have been saying she’d lost a lot of weight.

She showed me a photo of how she used to look like. “Here,” she said, “this is what I want to look like again.”

She looked chubbier in the photo, and she was smiling with her fingers up in the air.

“Fair enough,” was all I could say.

After a few more drinks we headed for another bar in Poblacion, a bar called Wantusawa that sold oysters. They were huge oysters, the size of fists. They were the greatest oysters I’d ever had.

“I haven’t eaten all day,” she said, digging into the oysters. “All I had for breakfast was whiskey.”

She ordered a margarita and I ordered a Coke, and as we drank she told me about a man she dated once. After ten months, she told him she loved him. He left the next day.

“People are ridiculous.” I pictured this ridiculous man, doing ridiculous things with love. How could he let it slip from his hands like that?

“Have you had chicken intestines before?” She asked me as we exited the bar.

“I haven’t had chicken intestines before.”

Her driver arrived and we proceeded into the back of a beast of a four-wheel drive. Her driver looked like a machine: he was well built, silent, almost like a soldier. He probably was a soldier.

“Hey,” Francesca said to me.

She slept, and I was left alone. I looked out of my window, at the skyscrapers, the giant billboards, the countless people, the smog, the endless lights. The other evening I walked along the streets of Manila on my own and ended up in a restaurant that was aimed purely at Japanese people. The waitresses spoke Japanese, the menus were in Japanese and there was a large screen in the middle that showed Japanese programming. I ate there, not knowing what the hell I ordered, and I was happy.

Francesca and I ended up in another bar, one of her favourite bars when she was younger. It reminded me of a garage stuffed with random chairs and tables. I think it was a garage stuffed with random chairs and tables. A mouse quickly ran down a wall. It was a hole of a bar—it was perfect. Francesca showed me a bottle of tequila or something with a scorpion and snake in it. It looked seductive and I wanted it in me, but I didn’t drink it.

“I want to drink so badly.” I was on the verge of tears.

“I think I’m drunk now,” Francesca said, slumping against one of the couches. “All I had for breakfast this morning was whiskey.”

I looked at her, this person I’d just met, this person whose heart had travelled everywhere, whose heart had gone to Mars, whose heart had stumbled to Saturn, whose heart had even taken a limousine across the galaxy—it wanted to keep exploring, but it loved her too much so it asked its driver to return to earth. I wanted to tell Francesca something so magical, something so powerful that it would suddenly make her life better, something so powerful that it would make her pain immediately subside. But I never know what to tell people when they’re sad. I don’t even know what to do around people most of the time. Should I dance? Should I say dirty jokes? Should I take them out to a movie? Or is time the only counsellor anyone ever needs? So I blurted anything, and she responded with something I didn’t hear.

When it was all over, Francesca left me with one of her books of poetry. One of her poems said this:

Maybe I really should get out of bed.