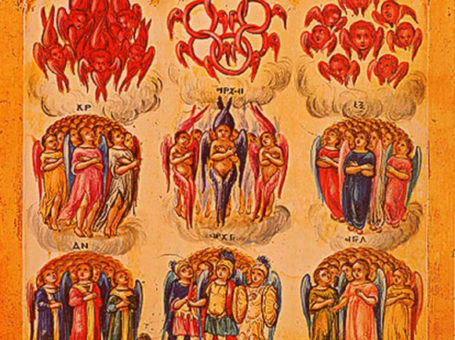 THE ANGEL WITH FOUR FACES

Posted by Dean on Apr 23rd, 2018 in Christie, Days Out, Spirituality

I wanted to write about angels but I couldn’t do it. Christie spent about two hours talking to me about angels. She spoke about the hierarchy of angels, how there’s the Seraphim, whose jobs are to continually worship God and who will only ever reveal themselves to humans if God is present, and then you get angels like the Cherubim, who have four faces (one of a man, an ox, a lion and an eagle), and then you get these angels called Thrones, who are these giant moving wheels. She then said that these top level ones come rarely — it’s the day-to-day angels, like the seven archangels, or the guardian angels, that come upon us like music as we do whatever on earth we think we’re doing.

Christie said guardian angels aren’t like the angels you see in the movies. They’re the lowest class of angels, and they’re the ones who interact with us the most. They’re more like beings of light instead of people, and if you see a white or silver feather, it’s an angel saying, “I’m here with you.” Angels seem to be like shift workers, taking turns and punching in their hours with you — the angel who is with you at the moment is the angel whose speciality it is to deal with whatever it is you’re going through.

I didn’t ask Christie any of this, because a smile had washed over her face as she talked about them, and there was pizza on the table and I was hungry, but I was also afraid. What if I were to see an angel with four faces? What if an angel had read my stories, what if an angel had seen that thing I did last Saturday? Will the angel warn me with a white feather? After fearfully ploughing through the pizza I eventually asked: “Where’s your angel?” And she said, “I have two, and they’re here right now,” but in the distance somewhere someone was suffering, and someone else was safe.

Christie asked me to Google this passage from the Bible:

So Jacob was left alone, and a man wrestled with him till daybreak. When the man saw that he could not overpower him, he touched the socket of Jacob’s hip so that his hip was wrenched as he wrestled with the man. Then the man said, “Let me go, for it is daybreak.”

But Jacob replied, “I will not let you go unless you bless me.”

The man asked him, “What is your name?”

Then the man said, “Your name will no longer be Jacob, but Israel, because you have struggled with God and with humans and have overcome.”

But he replied, “Why do you ask my name?” Then he blessed him there.