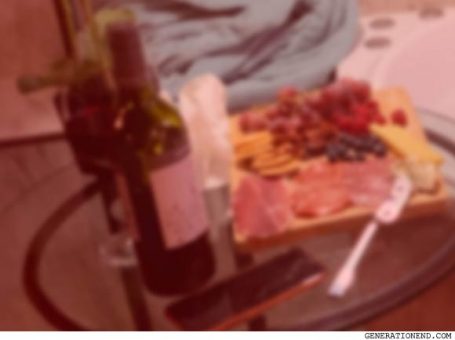 The other Monday I woke up and then went back to sleep again, and then I woke up in the afternoon with the intention of buying food, but it all seemed so tiring. I turned my phone on and stared at my bank balance. I firmly believe that if you stare at your bank balance long enough, it will improve. That’s why after decades of staring at my bank balance, I am a few hundred dollars wealthier.

Christie and I went to the mountains the other day. It was a long drive, and throughout the drive I became cranky and so did she. We had a fight but got over it. Well, I got over it and she didn’t. We drove in silence.

We arrived at the cottage and hurried to the balcony. The view was beautiful.

“The photos I take of these views are going to look great,” Christie said.

“Imagine the likes you’ll get on Instagram,” I said excitedly.

“It’s not about the likes,” Christie said, finally calming down from her bad mood. “It’s about the comments.”

“You have so much wisdom.”

We went to a restaurant, and because I’m trying to be a vegan now I picked the least appetising item on the menu. It came out and it was green and orange. I looked at Christie’s meal, all fresh and vibrant, and I cursed her, and all she did was point at me and laugh.

“And you said Okja was a powerful film!” was all I could say.

In the evening Christie and I set up a spa or sauna or whatever you call it. She prepared these hams and cheeses for us to eat while we relaxed, even though she knew I could no longer eat ham and cheese. But at least there was wine. As we drank she told me things and I told her things, and at some point I blanked out and thought about this: what if there was a way to become one with the entire world? What if there was a way to truly understand every living and non-living thing? Could you achieve that with prayer and meditation? Could I ask God for such a privilege? Why was I thinking this? Are these the kind of thoughts vegans think about?

And as I sat in the sauna, staring off into space, Christie asked me, “What is it that makes you happy?” And I thought about this amazing world that I’d been blessed with: the fact that we were in a sauna in the mountains, the fact that I was with a beautiful woman who’d given me beautiful wine, the fact that I was alive, the fact that I had good health, the fact that I was free, and all I could feel at that moment was an undesirable, ungrateful wave of sadness—I thought about all the things I’d tried to overcome this sadness: meditation, gratitude journals, sports, self development books and programs, concerned three-in-the-morning phone calls, mini retreats, constant prayer, constant seeking of God, the tears, the yelling, the drives in the night, the staring at the stars—but then I splashed water in her face and she swore and laughed and splashed water back at me and things were fine again.