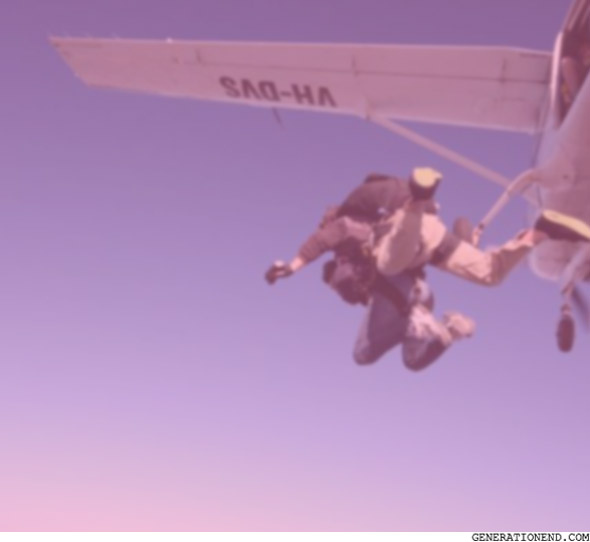 The next weekend, we went skydiving. We got to the place too early, so we walked to the beach, and she did star jumps and I threw rocks at birds. We went to McDonald’s and ordered some juice and we spoke about things that I no longer remember. I looked at her and took a photo: we’d gotten to that point in our relationship where we were completely comfortable with each other, yet still somehow completely attracted to each other. We still laughed at each other’s farts and left notes next to each other’s pillows.

Finally, when it was time, we went inside the skydiving place. They passed us some outfits to wear and briefed our group about safety and all that other shit before taking us all to a tiny, old airplane. I smelt my skydiving suit – it smelt like sweat. We walked to where all the planes were and filed inside the smallest and oldest looking plane out of all of them. The plane chugged a bit before finally lifting off and as I looked around its rundown and cramped interior I pictured the plane exploding and our body parts flying into the sky.

Because of the weather conditions we were only able to fly about ten thousand feet. My guide, who was attached to me, told me to sit on the edge of the plane, and before I could ask him why I was doing this he pushed us both off. Everything became a loud rumble of wind: I looked down at another skydiver beneath me, facing me, waving at me, hoping that I would wave back at him. He was yelling something I couldn’t understand, so I gave him the finger. He gave it back. I looked to the right and Mandy was there, screaming and laughing.

It was frantic at first, but when everything settled I wanted to keep falling. I wanted to be trapped in that fall somehow, and I wanted my skydiving instructor to detach himself from me and I wanted to keep falling, and falling, and falling. I was over the overwhelming burden of pretty much everything: the rich people and the poor people and the people on the internet and the people not on the internet and how subjective everything is, all the questions we have, all the answers we have, how unnecessarily necessary things are supposed to be. And I thought about heartbreak: I felt it before, and it was real, but with Mandy there, the word itself seemed like something alien. As the ocean and the city grew bigger I pulled the parachute thing and we bounced up and glided, and the guy behind me told me I could steer us wherever the hell I wanted.

We paid about a billion dollars for video footage of the fall. I drove Mandy home, and then I drove to my own place and called her and she said something and I laughed, and then she asked me what I would think if I filmed her kissing a girl and a guy, because she’d think it would be hot if I did the same, and I kept quiet for a while, and then we spoke about other things and I said goodnight, and she whispered that she loved me.